This is another quick update to explain what is happening with my latest loco development- a tinplate model of the streamlined Art Deco S Class steam locomotives launched by Victorian Railways in 1937 to pull their swanky new express train, The Spirit Of Progress. The above picture is the production protoype loco as she was in October 2019 in the tin. Below is a rendering in CATIA done back in the beginning- around 2016- to help get the 3-dimensional shapes right. To see her now go here.

The locos weren’t actually art deco to begin with- they had been around since 1928 when originally designed and built at the Newport Workshops in Victoria, Australia.

In brief:
They’re tinplate, 3 rail, O gauge. There will be lots of detail. In fact as time goes on more pesky detail keeps wheedling its way on there. The mech is the Bassett-Lowke derived 12V DC Permag open frame mech shown elsewhere on these pages. The loco has been designed to get around 3ft radius curves with the removable lower front side valences fitted, and a yet to be determined radius with them off (the real locos lost them later in their life because they were always getting dinged). Trying to have prototypical valences and get around any kind of curve is a real problem but in the end I did it by hinging them from their upper edge with a little pair of gooseneck hinges. A small coil tension spring keeps them in the correct position but the leading wheels can push them out of the way on tight curves.  At the moment the prototype will scrape around 2’6″ radius curves with valences on but I haven’t tried over reverse curves as yet. Wheels will be “course scale” like the A3s but there will be options for tinplate style (like the Cock O’ The North) for tubular tinplate track. 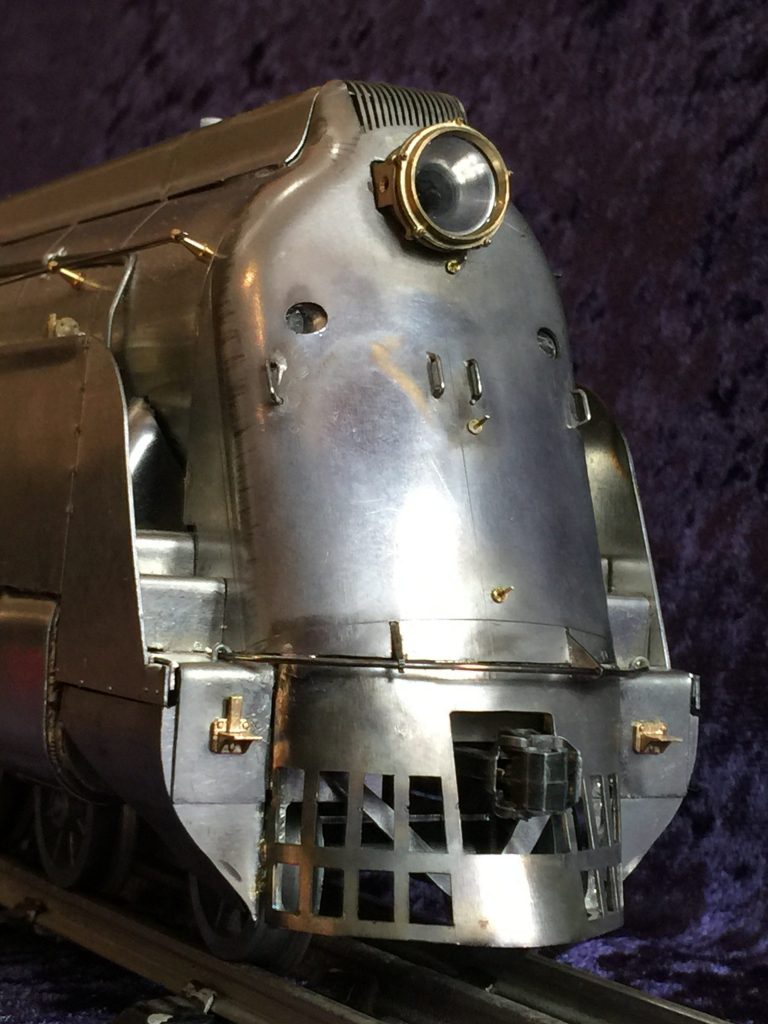 Above is a picture of the prototype front end with casting details, steps and bracket for the end of train indicator added. These are actually little 8BA investment cast bolts that hold the cowcatcher on, the idea being that if you have a prang and bend it up you can replace the cowcatcher. They should be slightly lower down, and will be for the production engines. The problem with adding detail is as soon as you add some, and it works, you realise how naked everything around it is. For example the cowcatcher itself looks very flat and featureless, so the interlacing and rivet detail will have to be added by pressing it in another die set before it gets formed. Likewise the smokebox doors need another tool for the panel gaps. 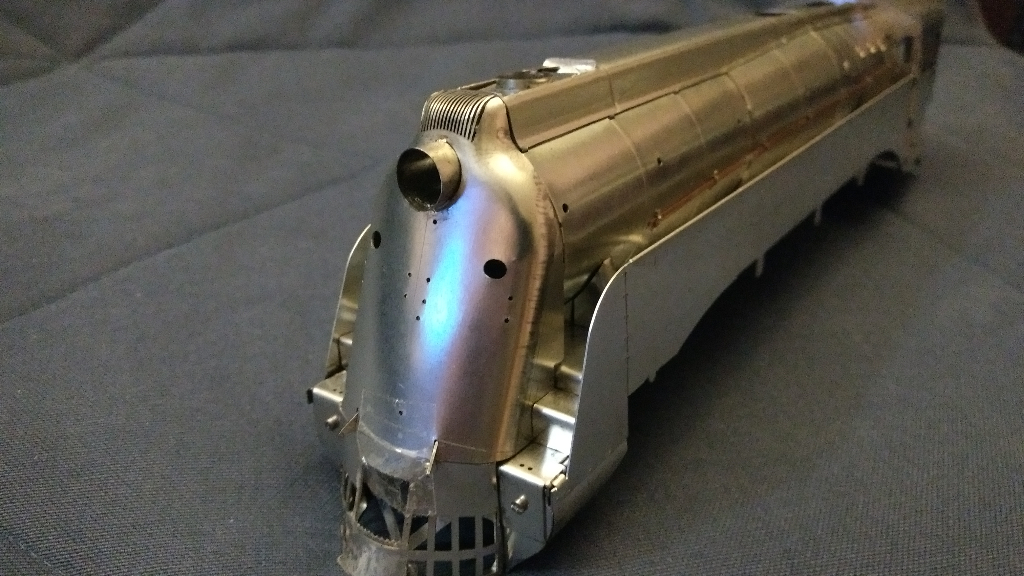 Above is the bare body of the production prototype. All the heavy press tooling is done. I am now waiting for the embossing and coining die tools for the skins, and finalising details like master models for investment casting staff exchangers etc.  There’s been a lot of work done on lighting recently, and in fact I might add a separate page. Still not finished though. 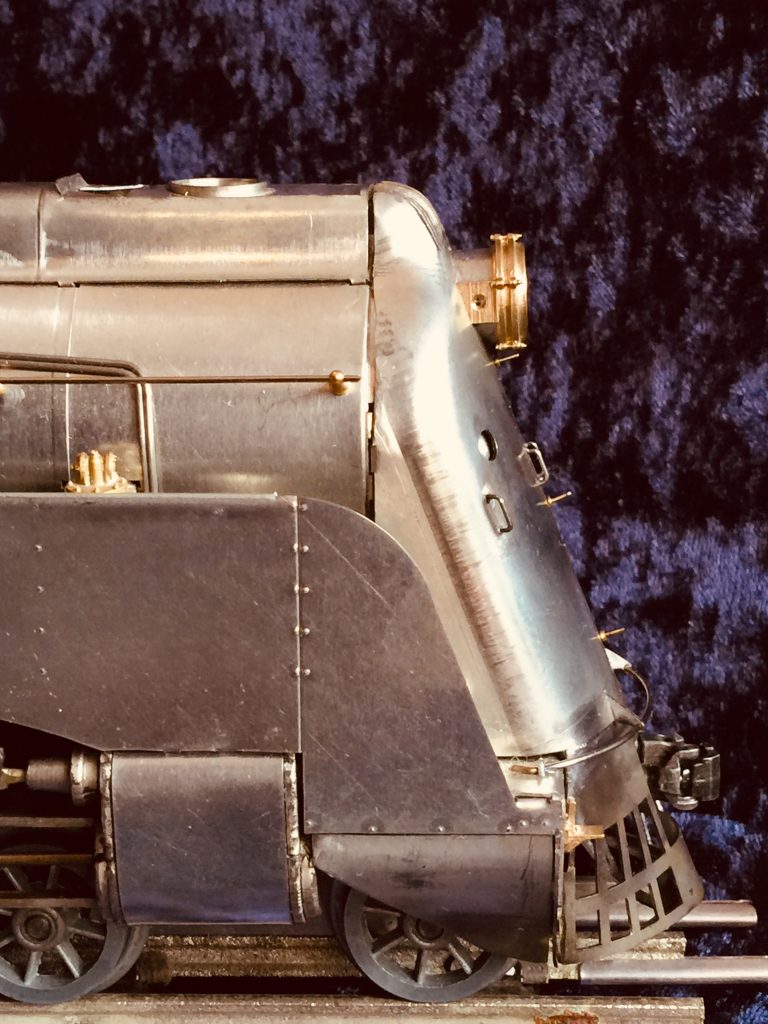 Did I say there will be lots of detail? You’d better believe it. 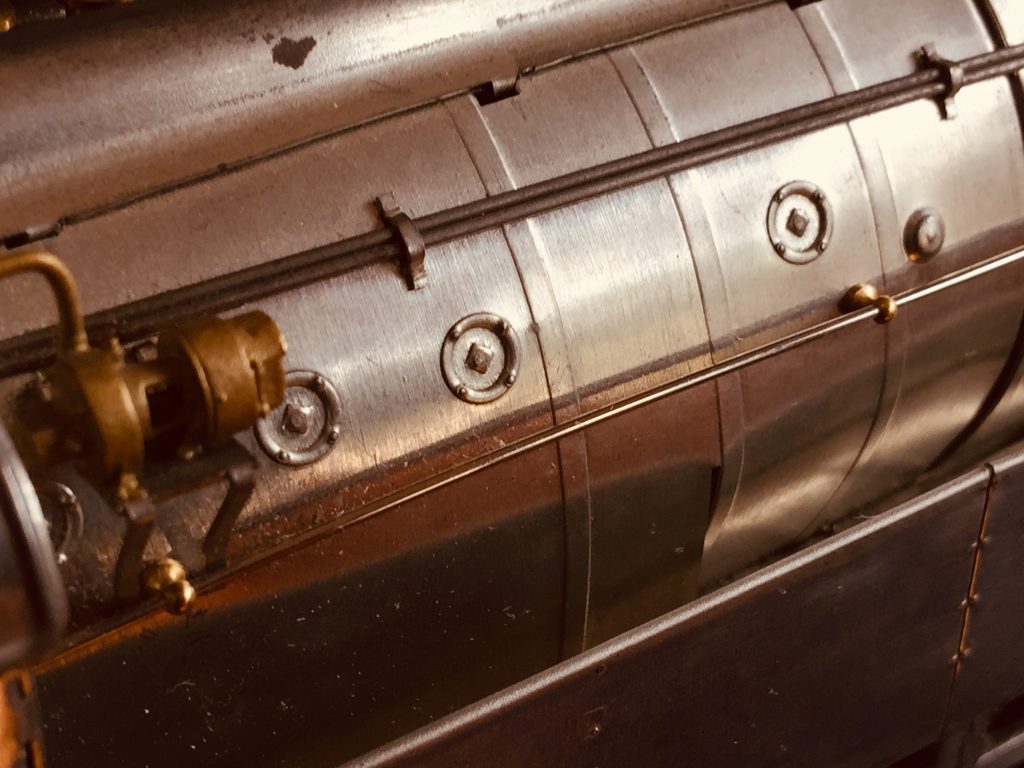 Oh, and this too. 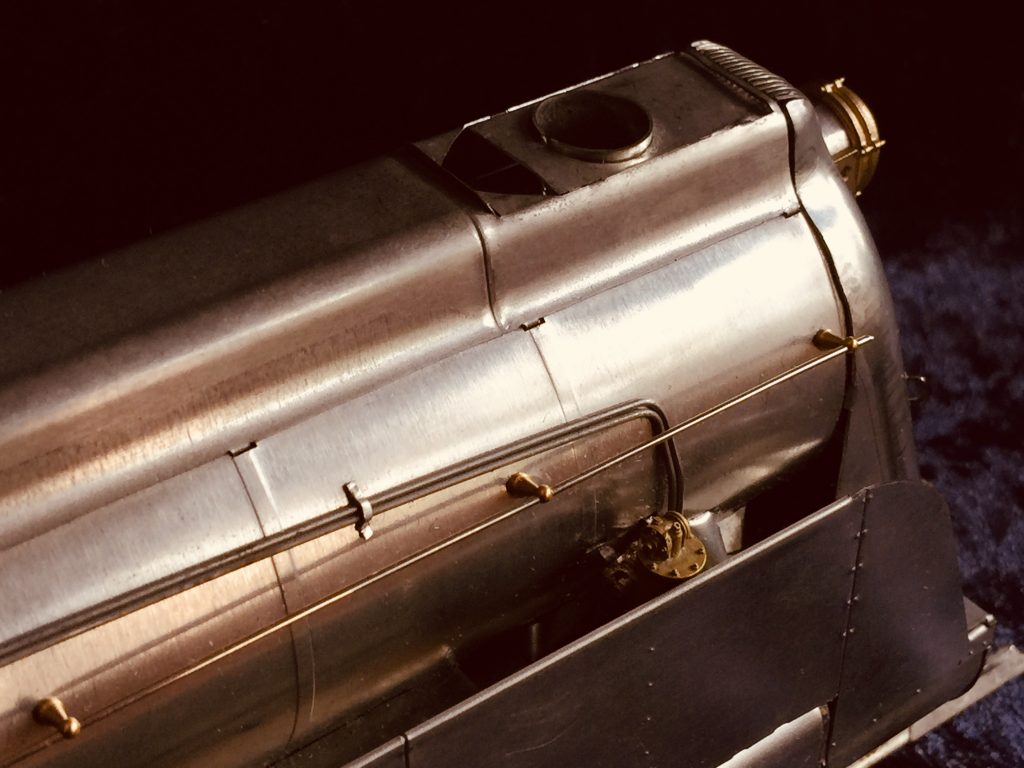 The turret and nose forming dies were by Walter Albert at Precision Tool and Die.

Here’s one for the rivet counters, after the cab detail tryout. I have to say the representation of the wooden moulding below the driver’s cab window is pretty amazing. I had no idea it would turn out as well as that. I just drew it and specified the die cutter profiles. The guys at Nichol turned that into a press tool. 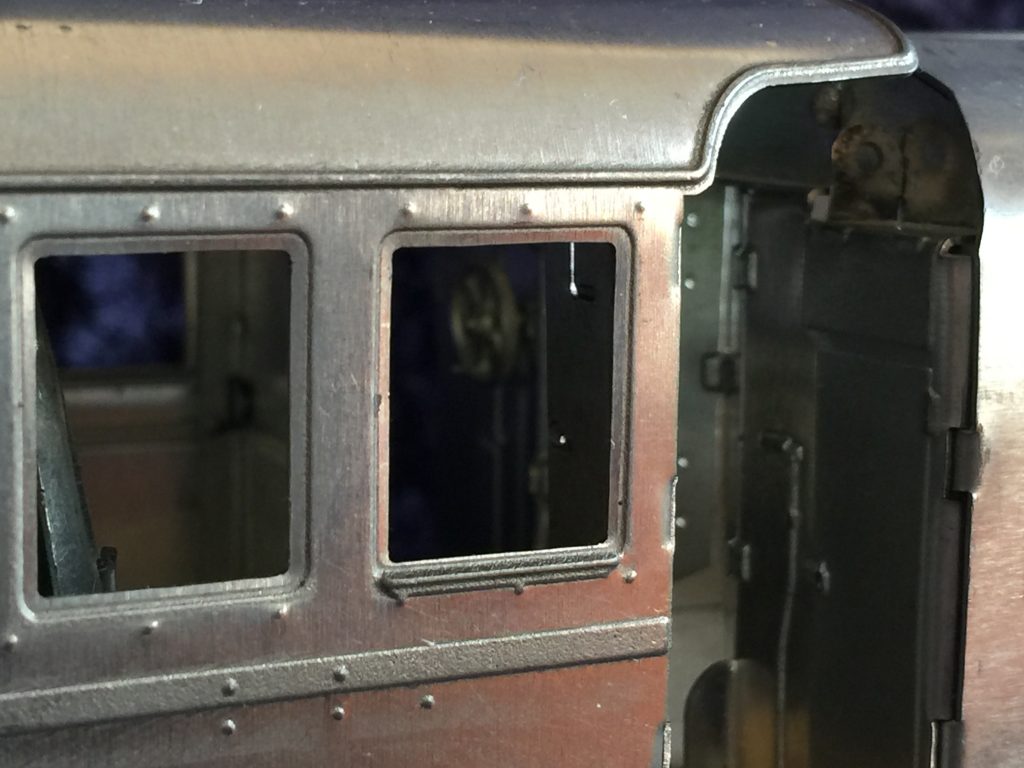 Another view of the cab, this is the door that leads out along the footplate. It needs a little brass knob. Note the ventilation holes in the front of the cab just below the roof. 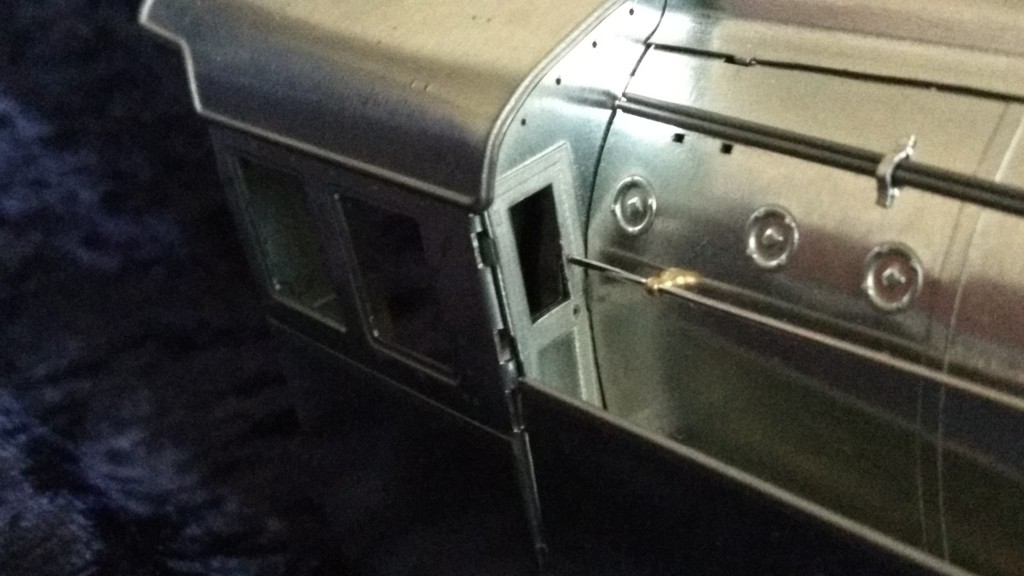 The Delta trailing truck in pressed tinplate. Originally this was a standard unit fitted on the S class, made by Commonwealth Engineering in Granite City, Missouri from a big casting. You see very similar units on many Australian and US steam locos. After a while the ones on the S  started to crack up and Victorian Railways had to run up their own version welded  from steel plate, but that was after the locos had been streamlined for a while. I still have work to do on this, I need to make form blocks for shaping the tinplate. This one I did by hand and it is a little wonky. I am pleased that the pressed representation of the cast-in “Made in USA” lettering came out as it should. The embossing dies for the cab and truck were by Brad Nichol and his toolroom guys at Nichol Industries. I am going to replace the axlebox with a more appropriate one, still tinplate though, the same as those on the tender (see below). 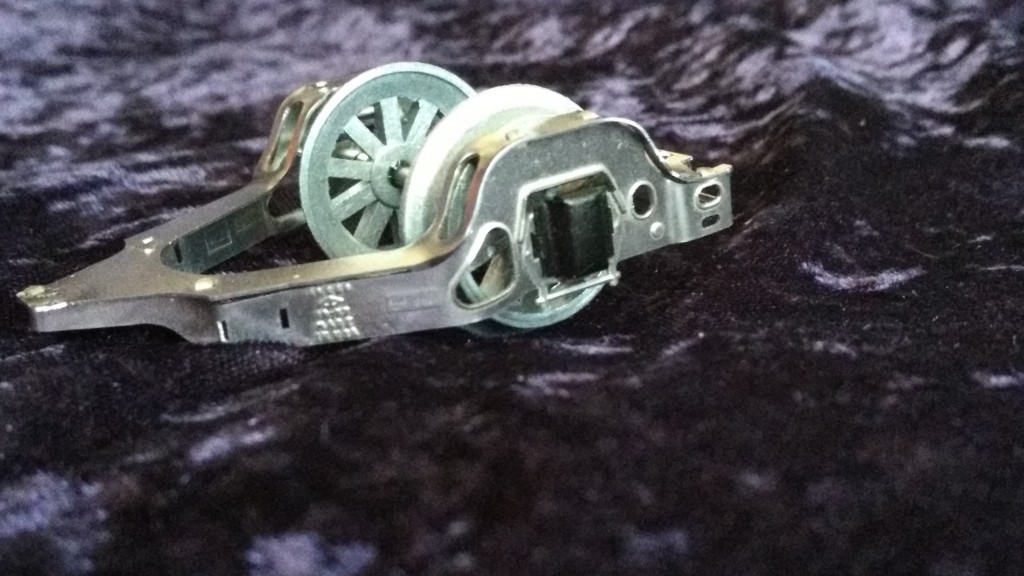 There’s plenty more to do, like the form tool design for shaping the top of the tender sides, below, so I’ll stop here and get back to work. 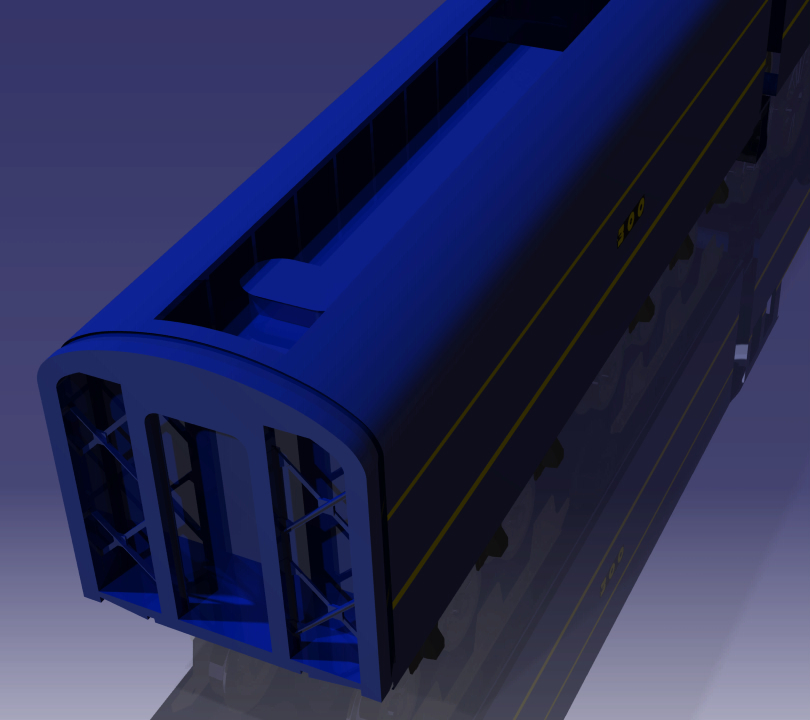 A further update, here’s a shot of the corridor connector/vestibule plate that goes on the back of the tender, and the pressed-in details on the tender back itself. The paperclip was there to haul a rake of Ace coaches over a prototypical three and a half hour Melbourne-Albury journey at a scale 60 miles an hour on a friends’s outdoor layout in the UK. 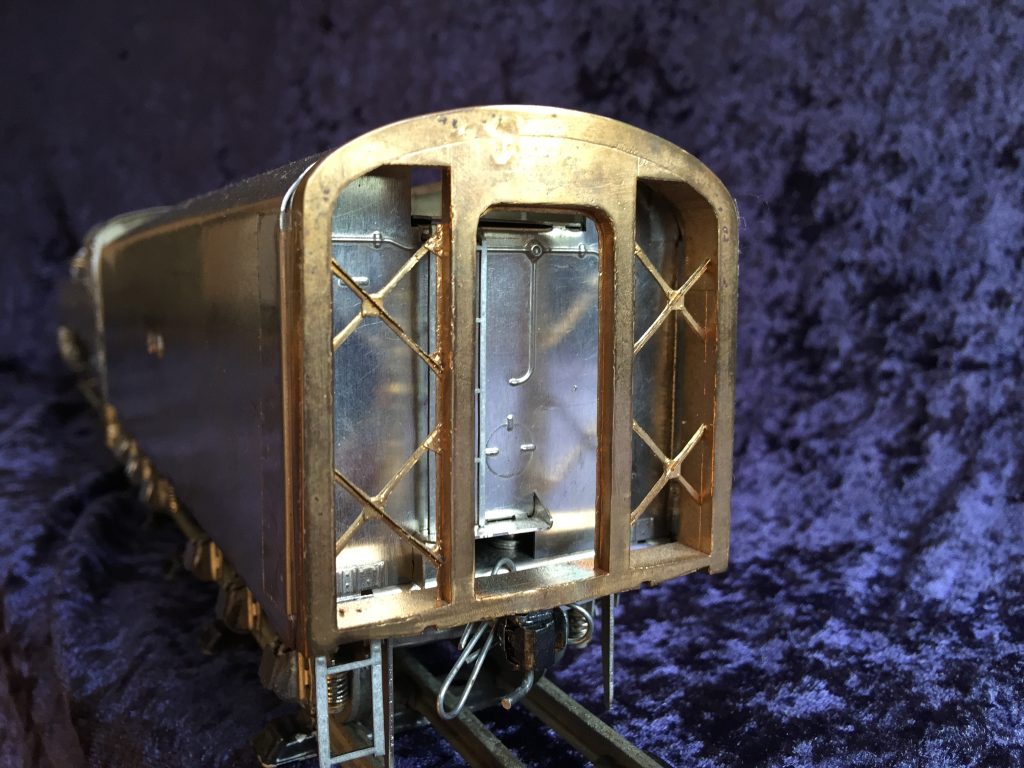 And at the front end of the tender, a little more has been done. Here is the front pressing assembly.

And also the front step which was conspicuous by its absence…..

The tender axlebox lid now has the coined details on the oiler lid including “VR” in tiny letters- just legible if a bit of an eye test. 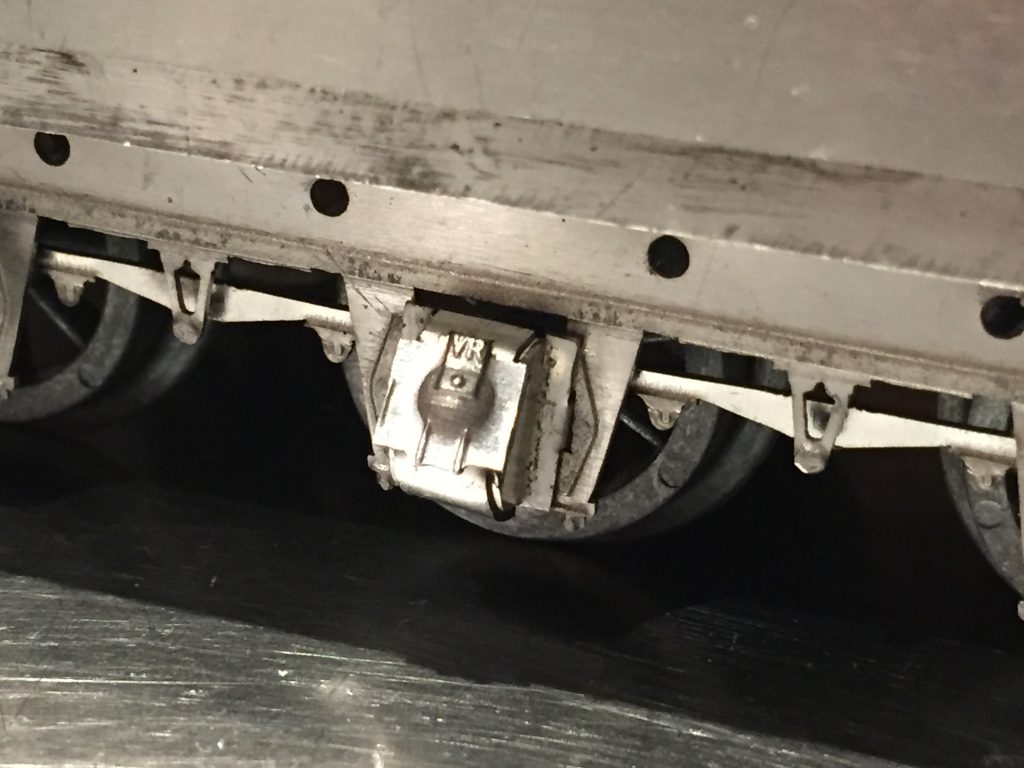 Here’s a close-up. I am glad to say the oiler lid does work, and you can even raise it to oil the journal! I might have to have a little felt pad in there to hold the oil…..

This inspired me to do a bit more on the tender. The water filler and toolbox are also embossed and will also open. But now the tender is coming along, the left hand side of the loco is looking a little quiet. So I am working on the staff exchanger, and maybe I will have to have some kind of crude representation of the Flaman speed recorder drive. Or maybe by then I will be taken away to a nice quiet place to think calming thoughts. Aaaargh, details, details! Stop it man! 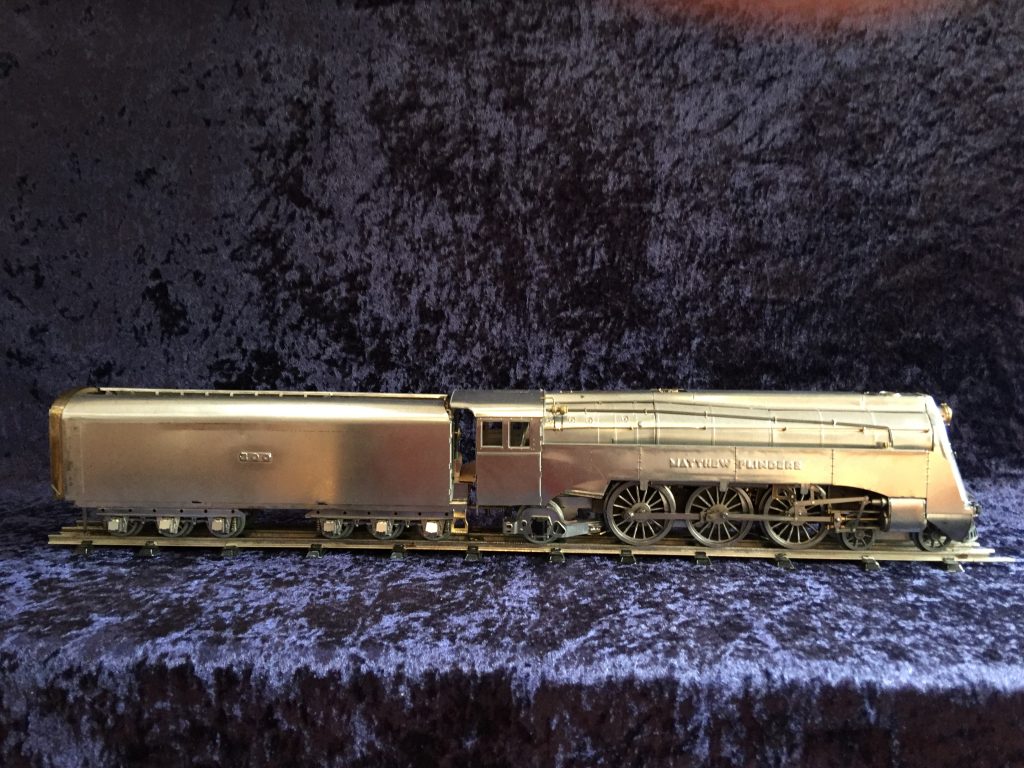 I’m still not taking orders yet, I don’t want a long waiting list hanging over my head until everything is well under control. I will take registrations of interest from those who want to know more.  The aim is to start production in Errrm maybe early 2020… but I’m not making any promises. Apart from one: it will be the best tinplate engine in production, bar none.