The P2 class “Cock O’ The North” was Britain’s most powerful steam locomotive. It was also a very early credible attempt at streamlining. Sir Nigel Gresley, Chief Mechanical Engineer of the LNER (London & North Eastern Railway) built it to remove the need to double head express trains on the winding route between Edinburgh, Dundee and Aberdeen in Scotland. It had a 2-8-2 wheel arrangement and three cylinders with rotary cam poppet valve gear. As such, it was an experiment, and never reached its full potential. Part of that was due to the limitations in calculation methods and the difficulty in getting and analysing good comprehensive performance data in those days. However, it was beautiful, showed flashes of brilliance, and paved the way as a test horse for the sublime A4 pacifics.

Controversially, on Gresley’s death his successor Edward Thompson made indecent haste in rebuilding “Cock O’ The North” into a completely different, hideous and even more unsuccessful locomotive. Many considered this “vandalism” was based on a somewhat whimsical grudge against some of Gresley’s design philosophies.

The good news is that now the P2 Steam Locomotive Company are building a full size replica of “Cock O’ The North”, to be known as 2007 Prince of Wales, with all the underdeveloped bits fixed. I can’t wait. 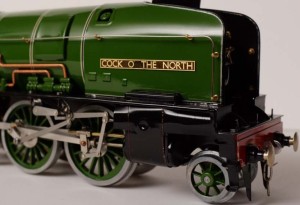 Based on tooling for a previous “Flying Scotsman” replica, we decided to have a crack at an O gauge tinplate “Cock O’ The North”. This was based around the essential premise of what would have happened if in 1934 Bassett-Lowke decided to introduce a tinplate “Cock O’ The North” using, as much as possible, their existing tooling for the Flying Scotsman and other standard parts they had available at the time, and following the method of construction and mechanical componentry used on the Flying Scotsman and other engines they designed in the late 1920’s and early 1930’s such as the Royal Scot and the Standard Tank. 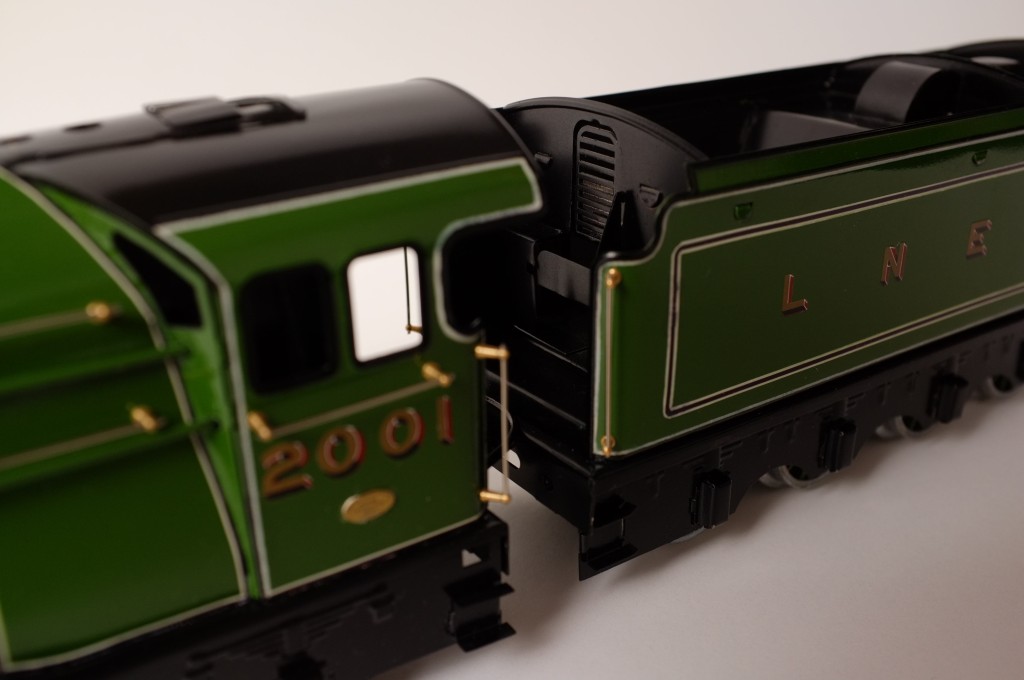 Close-up of Cab and Tender

In actual fact Bassett-Lowke did offer two versions of the Cock O’ The North but in extremely limited quantities. One was a “super-detail” loco costing £30 [about a third of the price of a new small car at the time] listed in the B-L December 1935 catalogue, which was probably built for them by Stanley Beeson and quite possibly was the same as the engine offered by Milbro in their catalogue, as Beeson built specials for both firms as well as offering them under his own name. The other was the Marklin engine, which I cannot find in a Bassett-Lowke catalogue, although all the other Marklin engines of that era seem to be listed (I might well have missed it). The Marklin engine is a magnificent beast, and very desirable, but it has no pretensions as to scale. 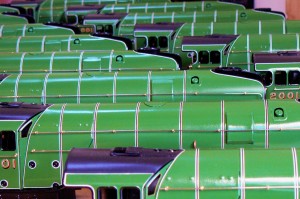 The step from the Scotsman to the 2-8-2 locomotive would not have been particularly great, although as it turned out the scope of the project changed somewhat during development. The initial concept layouts proposed quite a few parts being identical to or very lightly modified from their Scotsman equivalents, but as time went on, and as we amassed more information on the P2 engines, we began to want to do them greater justice. The flavour of the design changed from its initial shape of paying lip service to a lot of superficial details, rather like the Marklin version, to becoming something that was much closer to scale proportions (and much more capable of being dressed up as a semi-scale engine) even though it was tinplate through and through.

Another interesting aspect was the structural design of the body. Bassett-Lowke model engines tended to have an inner boiler shell extending the full length of the engine. This acted as a structural backbone, and with the Cock O The North, the combination of this inner skin and the outer cladding over the full length of the engine meant the structure became a full closed shell monocoque- immensely strong and stiff once the final tabs were folded over in their slots, and also a real challenge in dimensioning and tolerancing to ensure all the parts met up correctly when that was done! 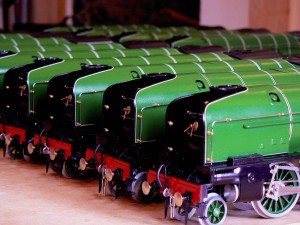 Some practical examples of this train of thought (so to speak) was the gradual change in components away from commonality with the “Scotsman”, and the decision to develop more embossing details, resulting in the need for additional press dies or techniques. In addition, the gradual realisation came upon us that a well-designed tinplate engine could look just as nice as an etched brass engine; given that they were both essentially sheet metal prettied up, by pressing sheet metal details in one instance and half-etching sheet metal details in the other. And of course, the exterior of a real 1:1 scale engine and tender is just a great galumphing lump of sheet metal as well…